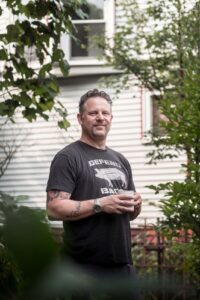 Husbands is the co-founder of the internationally-recognized team, IQUE BBQ, which became the first non-Southern BBQ team to win the Grand Champion title at the Jack Daniel’s 2009 World Championship Invitational Barbecue in Tennessee, in addition to taking home first place in the brisket category at the Kansas City American Royal World Series of Barbecue in 2007, and more than 35 KCBS grand championships. In addition to competing, he is also the co-author of six cookbooks, including The Smoke Shop’s Back Yard BBQ: How to Eat, Drink, and Party like a Pitmaster, Wicked Good Burgers, Wicked Good Barbecue, Grill to Perfection, The Fearless Chef, and Pitmaster: Recipes, Techniques & Barbecue Wisdom, awarded “Book of the Year” by National Barbecue News in 2017.

Having been hailed as “Boston’s Meat Maven” by The Boston Globe, he has appeared on CBS This Morning, Food Network, FOX & Friends, Cooking Channel’s Burgers, Brew & ‘Que, and most recently, as a celebrity guest judge on Season 1 and 2 of Food Network Canada’s Fire Masters.

In addition to the all the above, he is the owner and Pit Master behind The Smoke Shop, with four locations in and around the Boston area.  With a career spanning nearly 30 years in the restaurant industry, Husbands serves as one of Boston’s most celebrated culinary leaders and foremost authority on regional Barbecue and live-fire cooking in New England.

The Dallas Kosher BBQ Championship is presented to the community by the Men’s Club of Congregation Beth Torah and will be held on Sunday, October 24, from 11 a.m. to 4 p.m.  Admission and parking are free; food and beverages will be available for purchase.

The event is conducted under the supervision of Dallas Kosher and the world-renowned Kansas City Barbeque Society.  Teams from Texas and beyond will compete for cash and prizes in the Sunnyland Outdoor Living Shopping Center, at the intersection of Spring Valley and Coit roads, and benefits Congregation Beth Torah Men’s Club, Jewish Family Service Dallas (www.jfsdallas.org), and the American Red Cross.

You can help sponsor the food- and fun-filled 2021 event or sign up your BBQ team to compete. For details on team registration, or for additional information about The Seventh Annual Dallas Kosher BBQ Championship, visit us at: http://dallaskosherbbq.com/.